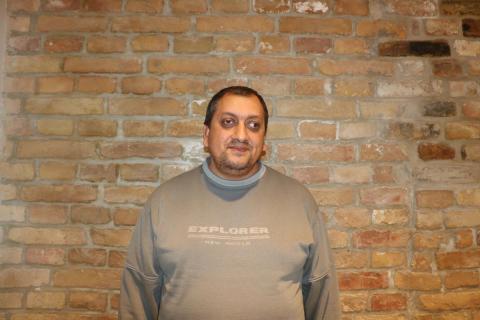 He was born in Budapest, in 1971, and currently lives in Miskolc. After completing a degree in sociology and becoming a teacher, he has continued to attend various postgraduate courses. He has been married for fifteen years and has three children.

Beyond volunteering at the Roma Minority Self-Government of Miskolc, he has been active in the political sphere since 2010. Although he had participated in municipal elections, he prefers working in the background of political efforts. Since he has always been a human rights activist, in the spring of 2014 it became clear to me that he had to demonstrate against the eviction of Roma people. As one of the main organizers of these demonstrations, he spoke in public and made statements to the press while also working together with the National Ethnic and Minority Rights Save Office, TASZ, Amnesty International, and the Helsinki Committee. He conducted sociological research in a project led by Gábor Havas and Gabriella Lengyel. Meanwhile, he laid siege to the offices of his city, Miskolc, with various submissions and complaints from the public that he could support with his research results and knowledge of the relevant legislation. While he thinks that this did not make him very popular in my city, to this day, he is proud of this time in his life and would not do anything differently.

After this he faced new challenges as his interests turned toward the issue of how to modernize his approach to human rights issues and activism because the old tools are not enough for achieving his new goals. This aim is what brought him to join RGPP. In addition to further expanding his knowledge, his long-term goal is to prepare for a PhD on the topic of Roma Citizenship and the Roma members of Hungary’s middle-class during the nineteenth century. His other goal includes writing a book about the outstanding lives of Roma people who have so far been "invisible" to Hungarian historiography. He has already collected about ninety percent of the materials needed for this project and now seeking an editor and publisher for this material.