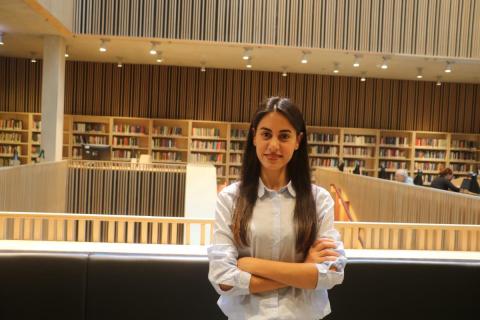 An architect with an MSc Degree in Architecture and Urban Design, Klaudia Veizaj’s motto is, “Dedicate yourself to what gives your life true meaning and purpose, make a positive difference in someone's life.” This is what has motivated her to become an integral part of the Roma community since joining the Political Roma Academy nine years ago, where she participated as one of the first activists in Roma issues. In 2014, the Institute of Romani Culture in Albania recognized her work with the award, “Volunteer of the Year,” thereby confirming that her work was having a positive impact on the community.

In 2018, out of forty internationally renowned urban artists, she was selected by MurAl Fest 2018 to realize her idea of painting the logo of “16 May - Romani Resistance” on a building façade in the capital of Albania. Her aim was to use street art to raise public awareness about the “Forgotten Holocaust,” a dark chapter in Roma history.

Klaudia applied to join CEU’s RGPP program because she wants to strengthen her Roma identity while developing her critical skills and deepening her senses of self-confidence as a young Egyptian/Roma, a group that often faces the ongoing experience of discrimination and stigmatization. Klaudia’s goal is to pursue an MA in Cultural Heritage at CEU. She believes cultural assimilation is a constant pressure and in the long term, she aims to preserve Roma culture as a part of the great mosaic of Albanian culture.