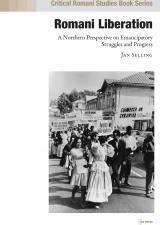 Centered on the trajectory of the emancipation of Roma people in Scandinavia, Romani Liberation is a powerful challenge to the stereotype describing Romani as passive and incapable of responsibility and agency. The author also criticizes benevolent but paternalistic attitudes that center on Romani victimhood.

The first part of the book offers a comprehensive overview of the chronological phases of Romani emancipation in Sweden and other countries. Underscoring the significance of Roma activism in this process, Jan Selling profiles sixty Romani activists and protagonists, including numerous original photos. The narrative is followed by an analysis of the concepts of historical justice and of the process of decolonizing Romani Studies. Selling highlights the impact of the historical contexts that have enabled or impeded the success of the struggles against discrimination and for equal rights, emphasizing Romani activism as a precondition for liberation.

The particular Swedish framework is accentuated by a stimulating preface by the international activist Nicoleta Bitu, and afterwords by two prominent Romani advocates, the politician Soraya Post and the singer, author, and elder Hans Caldaras.