Romani Studies Program at CEU launched a series of roundtable discussions on November 20, 2019, to promote critical approaches to analyze the situation of Roma. In the framework of the discussion series, past and present fellows of CEU’s Romani Studies Program present and discuss their pioneering work on the oppression, resistance, and emancipation of Romani people. These discussions propose inquiries into the forms of the racialization of Roma and the mechanisms and impact of racism and structural discrimination on Roma and Romani identity.

At the opening event, three scholars analyzed the challenges and pitfalls of Roma inclusion policies: Joanna Kostka, Iulius Rostas, and Silvia Cittadini. In her presentation, Joanna Kostka demonstrated how the European Cohesion Policy interacts with domestic policy-making by studying the cases of Spain and Slovakia. Her new book, Financing Roma Inclusion with European Structural Funds: Why Good Intentions Fail, addresses this issue and highlights the challenges of Roma inclusion strategies. Iulius Rostas presented his new book A task for Sisyphus: Why Europe’s Roma Policies Fail in which he examines the reasons behind the ineffectiveness of the EU’s Framework for Roma Integration in three different countries: Hungary, the Czech Republic, and Romania. 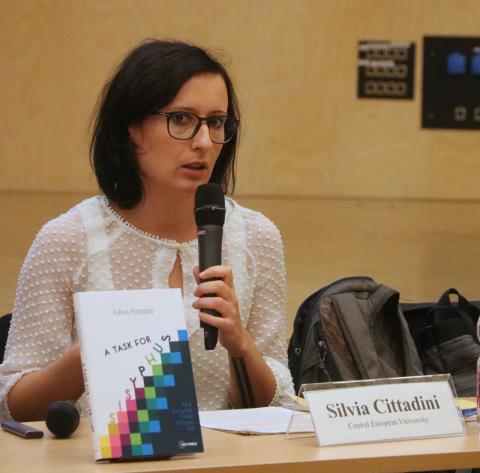 Silvia Cittadini’s presentation focused on the interpretation and usage of the concept of adequate housing in the EU’s inclusion policy and the way housing policies are implemented on the micro-level in three different Italian municipalities.

Angela Kocze, Chair of the Romani Studies Program, served as a discussant of the panel inviting presenters to relate their findings to each other and to critically reflect on their assumptions.

We were delighted to see a great turnout at the event, and we hope to welcome you on our upcoming discussions: