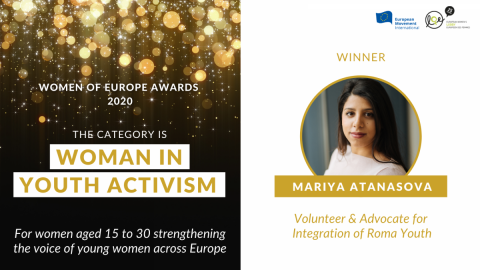 Maria Atanasova, current student of the Roma Graduate Preparation Program is awarded with the Woman in Youth Activism Award 2020 for her work as a Volunteer & Advocate for Integration of Roma Youth.

The ceremony of the Women of Europe Awards was held online on the evening of December 2. According to the jury, Maria Atanasova won the Woman in Youth Activism award for her incredible and enormous work fighting for more visibility of the Roma community and for more participation of the Romani youth in society and politics. Her volunteering and mentorship continues to greatly contribute to uplifting one of Bulgaria’s and Europe’s most disadvantaged minorities.

“The Women of Europe Awards are important because we still need a reminder in society that there are strong women across Europe who are great role models.“

The Women of Europe Awards

The Women of Europe Awards are handed out annually by the European Movement International and the European Women’s Lobby to honour and celebrate women striving to advance the European project in their professional or private capacity.

Former winners, per category, include: