Being Part of a Collective 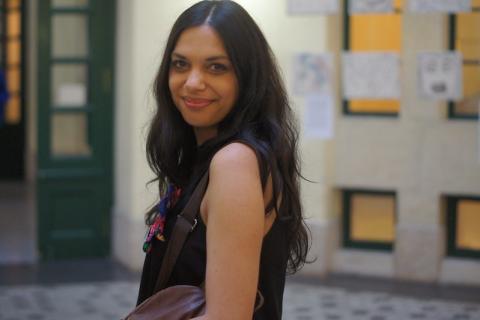 Being Part of a Collective

Sebijan or Sebi is one of our alumnae, who started as an RGPP student, continued her studies at CEU, and for a couple of years she also worked as an RSP coordinator. Sebi is a young activist - scholar, a fierce student - advocate, and a great friend for many. On the Romani Resistance Day, we want to share some of Sebi’s thoughts about the Program, the role of academia, and the RSP community.

I am currently working as a Junior researcher in the research project: The politics of anti-racism in Europe and Latin America: knowledge production, decision-making and collective struggles, in the Centre for Social Studies and a PHD student in the doctoral program Human Rights in Contemporary Society, University of Coimbra, Portugal. I am working in the University as a researcher and doing my PhD because I want to bring all those experiences of Roma that academia has ignored and invisibilised. Rather, has focused on describing an imaginary vision on our culture and who we are. Academia as a powerful institution has contributed a lot on damaging our image as Roma and to a certain point by ignoring the violence exercised against us, it contributed to legitimizing that same violence.

My research focuses on the politics of structural and everyday Anti-Roma racism and its traumatic effects on the Roma people in Europe. I engage with Philomena Essed's definition of the concept of everyday racism as practices, activities and attitudes accepted in a given system. The notion of the structural racism refers to racialized governmentalities and ideologies/epistemologies that reproduce power relations and dehumanization that are grounded on white privilege/supremacy, thus, the maintenance of whiteness as state sovereignty. The PhD project aims to analyse the layered interconnectedness of political violence, racialization and the human as ideologies that (re)produce mechanisms for controlling, disciplining and killing Roma bodies. These mechanisms are historically rooted in colonial power relations that has constructed the "Other/non-human" body, the Roma body, as disposable flesh that feeds notions and practices of (un)governability, necessary control and discipline. Thus, I argue that the violence against the Roma can no longer be dislocated from the analysis of the historical violence against the Other body, the non-human body. Drawing on this, this research aims to think through political and institutional notions of Antigypsyism as sets of relational socio-political processes that discipline Roma bodies into humans.