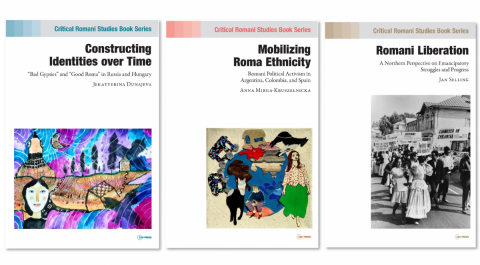 On December 3, 2021, the Romani Studies Program (RSP) held a virtual event for the official launch of the Books series titled “Critical Romani Studies”. The CRS Book Series consists of three books, each of those are written by emerging Roma and non-Roma scholars in the field of critical Romani Studies. The Constructing Identities over Time “Bad Gypsies” and “Good Roma” in Russia and Hungary, authored by Jekatyerina Dunajeva, the first piece of the book series, became open access literature on December 3. The other two books “Mobilizing Roma Ethnicity – Anna Mirga-Kruszelnicka” and “Romani Liberation – Jan Selling” will be published in June and May of 2022.

The book-series launched by RSP fills a gap in the field of Romani Studies. The idea of creating such a book series is rooted in the growing demand for critical in-depth studies on the structural oppressions, racialization, and social position of Roma by scholars, policy-makers and activists. Being mindful of the multitude of actors that take part in shaping structures and discourses, the series editors and RSP faculty, Angéla Kóczé and Márton Rövid, intended to build a series that targets not only the traditional English-speaking academic audiences, but also those who are activist-scholars or policy-makers.

According to Angéla Kóczé, Chair of Romani Studies Program, the book-series novelty lies in its intended use and ability to create an interdisciplinary dialogue:

“The Critical Romani Studies Book Series represents an intellectual compass and groundbreaking interdisciplinary engagement with various aspects of the historically racialized Roma. This book series represents the current culmination of critical knowledge and productive dialogue between Romani and non-Romani scholars”.

The Book Series’ abilities to engage various audiences and contribute to a new discourse were also recognized by CEU Press. As CEU Press Director, Emily Poznanski and Frances Pinter, Founder and Executive Chair of the Press’s Advisory Board, stated

“We are committed to this book going into open access because of its relevance to broader audiences. The CRS Book Series should be available for all readers beyond academia without any barriers to access”.

Thanks to their support, Jekatyerina Dunajeva’s book, the first book of the series, has become published as an open access book.

The book-series contributes to Critical Romani Studies in a number of ways. Most uniquely, the three authors center positionality and invite scholars to rethink the relation between researcher and affected communities.

“These books are all personal writings, but at the same, they are all contemplating about the positionality of researcher which is a huge and complex topic in the field of critical Romani Studies.”

“Each work reflects on the approach of deconstruction, further construct another emerging theoretical concept of antigypsyism, and offers new insights into the history of Roma in the past decades.”

These are some of the thoughts that the three authors of the Book Series – in publishing order – shared in relation to this historic work, key findings, and the significance of their own books and the Book Series:

“The Constructing Identities over Time  is a very personal narrative in which I try to be very honest about who I am, how I have written this book, and what my intentions with the book are. The framework of the book is the larger question of state/nation building and identity formation which I argue are inseparable processes. I look at contemporary issues of Roma identities through historical lens.”

Jekatyerina Dunajeva (Katya) is an Assistant Professor of Political Science at Pázmány Péter Catholic University, a Researcher at Central European University’s Center for Teaching and Learning, and a senior researcher at Public Policy and Management Institute, a Vilnius-based research and policy analysis center. In addition, Katya is one of the editors of the Critical Romani Studies Journal, hosted by CEU’s Romani Studies Program. She defended her PhD in Political Science at the University of Oregon (USA) in 2014. Throughout her career, Katya acted as a consultant, advisor, researcher and political analyst for international and local NGOs, think tanks and other institutions. Her research has been published in several book chapters, peer-reviewed journals and edited volumes. All of her work, both academic and applied, has revolved around the nexus of youth policy, education and social equality.

“The Mobilizing Roma Ethnicity is a critical exploration of ethnic mobilization focusing on the case of Roma, and I praise the genealogy of Roma political activism in three countries: in Spain, Colombia and Argentina. By providing original empirical data on Latin America, the book opens a new avenue of inquiry in Romani Studies, pointing to the global characteristics of the Roma movement and the Roma diaspora as a global diaspora.”

Anna Mirga-Kruszelnicka is an anthropologist and Roma activist, born in Cracow/Poland. She earned her Ph.D. in Social and Cultural Anthropology at the Universitat Autònoma de Barcelona (UAB) in 2016. She holds an MA in European Integration from UAB and an MA in Comparative Studies of Civilizations from the Jagiellonian University in Cracow (UJ). She is the author of policy evaluations, reports, and articles, and is the co-editor of the book Education for Remembrance of the Roma Genocide: Scholarship, Commemoration and the Role of Youth (Libron, 2015).

She has been an employee, member, founder, and collaborator of numerous Roma organizations in Poland and Spain. From 2008 to 2012 she was the European project coordinator at the Federation of Roma Associations in Catalonia (FAGIC). From 2013 to 2015 she was an Open Society Foundations Roma Initiatives Fellow, conducting a comparative study of the Roma associative movements in various countries of Latin America and Europe. From 2015 to 2017 she was the coordinator and curator of the Academic Section (aka. Roma Civil Rights Movement Section) in the RomArchive – Digital Archive of the Roma. Between 2017-2018 she was a Post-Doctoral Research Fellow of the Romani Studies Program at the Central European University (CEU) in Budapest.

“Gypsy Lorism legitimizes domination and subordination as an unchangeable system. This is something that I want to contest in my book, Romani Liberation, to support and cite voices that are also doing that. I highlight historical examples of success in the history of Romani liberation, and some heroes and those struggles. My aim is not to predict something or give recommendations. I just want to contribute to providing historical comprehensive knowledge.”

Jan Selling is the head of department of Romani Studies, an associate professor in History, Senior Lecturer in Romani Studies at Södertörn University, Stockholm. He is specialized in the areas Romani History, emancipation and antigypsyism.

1998-2002 Selling was a PhD student at Wolfgang Wippermann’s colloqium at the Freie Universität, Berlin. In 2004 he completed his dissertation on “German collective memory discourses on nationalism, commemoration politics and the Nazi past”.

He organized the Uppsala International Conference “Antiziganism – What’s in a Word” and was the principal editor of the conference volume.

Dr. Selling performed research on the theoretical concept and the empirical history of Swedish antiziganism in a long-term perspective and published “Svensk antiziganism: Fördomens kontinuitet och förändringens förutsättningar” (in English “Swedish Antiziganism: the Continuity of Prejudice and the Conditions for Change”, Limhamn: Sekel Bokförlag/Isell & Jinert, 2013).

About the Book Series:

The Critical Romani Studies Book Series aims to bring together emerging new interdisciplinary scholarship by Romani and non-Romani critical scholars within, and beyond, Romani Studies. The series galvanizes cross-dialogues between various regions, disciplines, ideas, approaches, and methodologies to expand the spatial-temporal and conceptual realm of critical Romani Studies. The Book Series critically examines the intersectional racialization of Roma as well as different forms of deep-rooted patterns of structural racial/classed/gendered exclusions, oppressions, and inequalities. 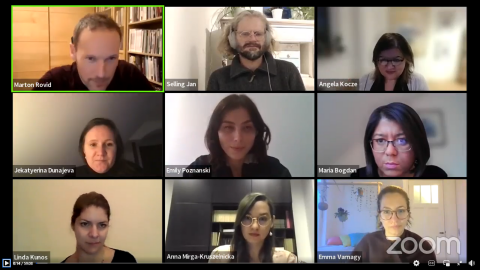