The English Language Opened my Horizons 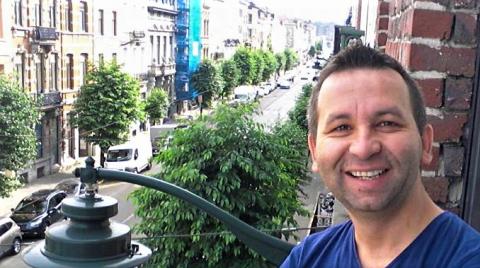 Biser Alekov (RAP 2004) is an inspirational figure among the new generations of Roma for many reasons. In 2004 he was one of the 15 students who got admitted to the Roma Access Program (the former name of RGPP) at CEU. Later on, he gained first-hand knowledge about the formation of several Brussels-based Roma organizations. He has been working with Roma in Brussels since 2012, and in 2019, he initiated actions to protect those Belgian Roma Traveller communities that were the target of the country’s largest police raid in the last 20 years. He speaks 7 languages and is pursuing his second PhD degree. He is experienced in EU-level advocacy, he is a Romani linguist, a social and cultural entrepreneur who opens a business to encourage others. At heart, he is a true community developer. If you work in Brussels or seek information about the Roma’s situation in Belgium, everyone will tell you the same: “- Go to Biser! Have you met Biser? He knows, he will introduce you to the community!”.

Today we have Biser with us:

Looking back, I think the program – that time it was called Roma Access Program - was very well designed. It targeted Roma people with basic English. Our group was very diverse - some of us were already married and had family. Staying away from family was a challenge for all of us, especially for those who already had their own. In 2004 Bulgarians had to apply for a Hungarian visa! But I also remember that whenever one of us started to have some hard time because of staying away for so long from their family, we were there to support each other, we kept each other in the program. Since then, 17 years have passed, and several people from my cohort are now in high level positions and have successful careers.

Before I applied to the Program, I had been an activist and after having served in the military, I worked at the regional administration office. My job was fine; I was good at it. I felt, however, that I needed more, I wanted a more dynamic life. I also felt that I wanted to be more useful for my community. Because of that, I decided to quit my job to be able to study in Budapest. I entered the Program with the expectation to learn English and I was curious to see where it might take make. As an activist, I was involved in international activist networks, and predominantly we used English as a working language. I thought if I wanted to express myself in English, the Roma Access Program provided me with the best opportunity to learn it. RAP was an opportunity for academic and professional development as well as for acquiring a new language.  On the program, we were divided into two groups – beginner and advanced. I was in the first group. For the first 7 months we only had English classes; and we wrote two official English language tests – it was IELTS at that time. After the 7. month we audited classes at the CEU MA programs of our choice. We could audit classes of two MA programs.

I took classes in Human Rights and Nationalism master’s programs. Nationalism studies triggered me because we, Roma often discuss the notion of nation, we talk about viable opportunities for stateless nations for self-determination, and we ask how creating a nation state may or may not help Roma communities. On the other hand, taking Human Rights classes was an obvious choice, as a was a human rights activist.

I think back in the initial years, preparing Roma students to apply to an international MA was not the only one objective of the Program. It also aimed at creating a generation of Roma who can speak English and represent the interest of their own communities on local and international level. 20 years ago, only very few Roma spoke English. I remember whenever they wanted to raise their voice at international conferences and meetings, many Roma had to go with an interpreter so as to be able to participate in the discussions.

After finishing the Roma Access Program, I did not continue my master’s studies at CEU, but I was accepted for a short-term internship in Strasbourg, where I worked at the Roma and Travellers Division of CoE. When I returned to Bulgaria, I enrolled in a PhD program in methodology for teaching Romani language at the University of Veliko Tarnovo. I had multiple jobs, I worked on community development with a local non-profit, and I also worked for 5 years at the same university, where my role focused on opening access to higher education for Roma students from very vulnerable communities. We developed a successful BA-level program in primary education and Romani instruction. This program provided lots of flexibility for its applicants. For example, applicants had the possibility to write the entry-level exam in Romani language. During the 4 years, we helped 65 Roma students graduate. Many of these alumni work internationally as translators but others became teachers and focus on helping local communities.

Eventually, this BA program was terminated after 5 years and I left the university. By that time, we had expanded the international presence of our informal group and had developed significant expertise in working on grassroots level. From an informal network of a group of organizations, we developed an official structure for exchanging experiences on community development. This is now a well-known entity, called ERGO Network, based in Brussels.

In 2009, I was employed by ERGO and its partner organizations, and I worked there for 3 years as information and network coordinator. My work was to maintain the network with members and strengthen the connection among them.

While in Brussels, I started learning Dutch – and later French -, which helped me understand better the local dynamics and the situation of local Roma. Partly because of that in 2012 I decided to stay in Brussels, but I reconsidered my professional path. I returned to community development, and I was employed by a Flemish Dutch NGO and I started working with local Roma communities. Going back to my initial interest was a very conscious choice. I tried myself in EU level- advocacy but working on community level was my greatest strength. That facts that I come from a small village and early on I turned towards activism, shaped fundamentally the way I see my role in the Roma movement. Since 2017 I have been working as a social worker in the municipality in Anderlecht, Brussels, where I help Refugee Dom (Roma) communities from Syria, I actively protect the rights and interests of Roma in Brussels living on campsites and caravans. Now I reached the point where I have gained a lot of experience in advocacy and community development; I know a lot about local politics, and people trust my judgement when it comes to Roma in Belgium.

The CEU Roma Program had a huge impact on my life. Without the Program I would not be living and working in Brussels. Learning the English language opened my horizons and helped me start a life in Brussels and establish myself. CEU and the exposure to Gender Studies were also essential in the processes of coming to terms with the complexity of my own identity.  I understood that Romani heritage and LGBTQI identities are not at all exclusive. Rather, it is quite the opposite: The more people I met, the more certain I became that LGBTQI Roma individuals need to become more visible, and we need to share our stories. Over the time I have founded several NGOs for Roma LGBTQI youth, for example, the Balkan LGBTQIA, and I am also a board member of other organizations, for example Rainbowhouse, which is a big LGBTQI umbrella organization in Brussels and Medimigrant.  With Balkan LGBTQIA, last year we published a book titled My Story, which tells the stories of 8 LGBT Roma individuals.

As I turned 40, I am proud of my achievements and the community I built here; and I am full of new ideas. Recently I have enrolled in a new PhD program at Seville, and I focus on Syrian Dom and migration. Earning another PhD title is not what motivates me; I already have one. I consider PhD work as a structural way to work on issues and raise attention to them.

For social workers like me, empowerment is in the heart of our activities – I constantly encourage kids to go to school, talk to young people to engage in mainstream structures, and help them become active citizens.  One day I might engage in local politics, because serving and representing my community is who I am. I am well aware, however, that certain processes must take place before that and those take time. Meanwhile, I keep working with the community in any way I can. I build partnerships across local organizations, institutions, and Roma communities, and I slowly build political education into my activities and help Roma better understand their own voting power. In whatever I do, I try to stay true to the mission of a community developer.

And where are YOU now? If you would like to share your story with us, please write us: rgpp@ceu.edu