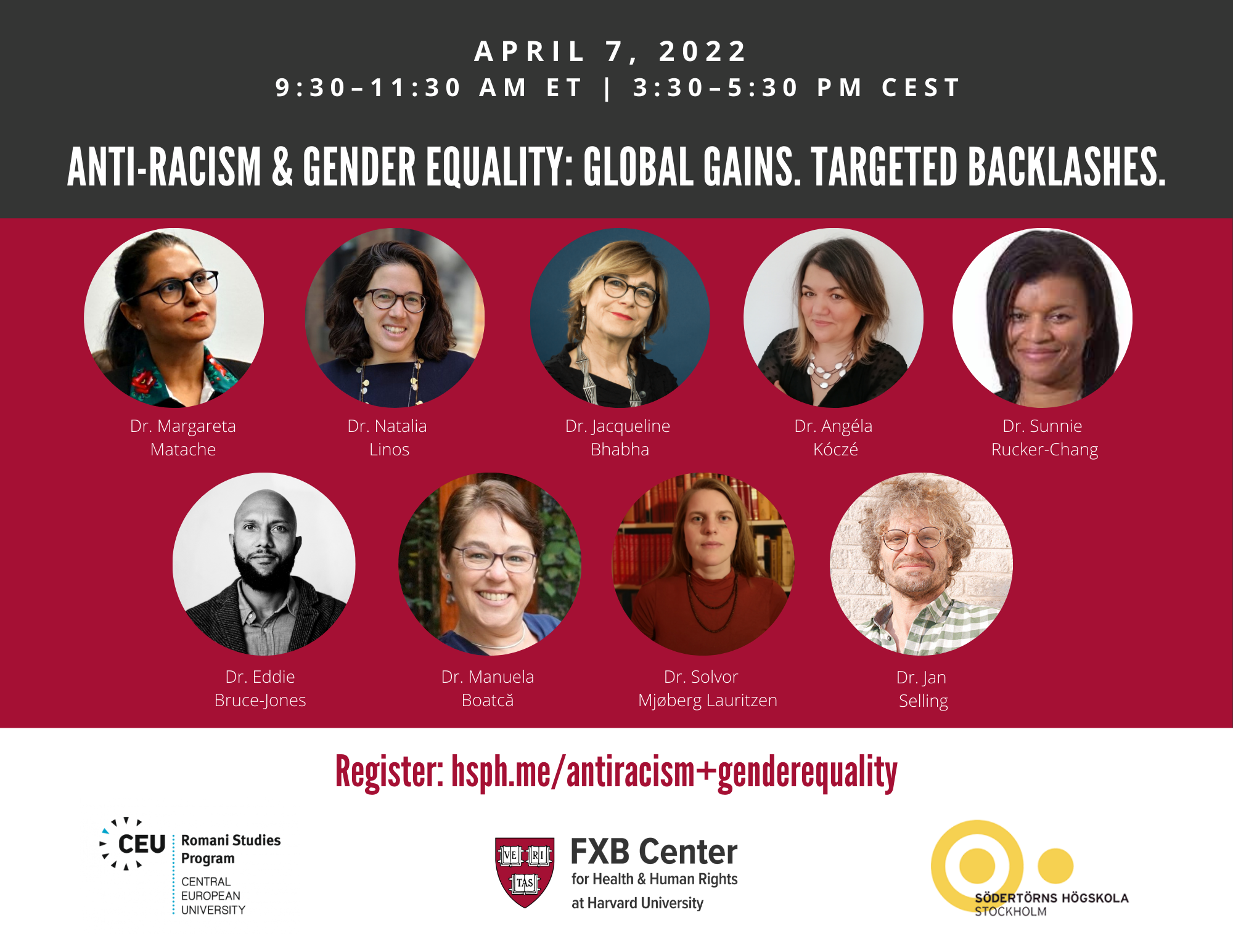 The event marks the 51st anniversary of the First World Romani Congress when the Romani Day, flag, and anthem were adopted. Thus, while this day represents a significant moment in Roma history, we would like to take this opportunity to reflect on the recent global gains of anti-racist movements, counteract backlashes, and foster dialog and solidarity amongst historically oppressed peoples.

Please register by 5 April at https://hsph.me/antiracism+genderequality

Anti-racism and gender equality have recently acquired critical gains, from the extraordinary force of Black Lives Matter to mobilize communities against racism at a global level to national or regional initiatives, such as the 1619 Project, the European Roma Institute for Arts and Culture, EU Strategy for LGBTIQ equality, or the marriage equality laws in Chile, Switzerland, or Costa Rica. Yet, not surprisingly, such achievements have also been met by vehement and coordinated backlashes and opposition in Europe, the United States, and elsewhere. For instance, as Ibram Kendi argues in The Atlantic, in the U.S., “‘anti-racism is anti-white’ is the mantra dividing the Democratic Party, especially since the 2021 elections. It is the mantra unifying the Republican Party, especially since the 2020 election.” In Hungary, the Orban leadership defunded and banned gender studies in universities, started an anti-LGBT campaign as well as an anti-Roma campaign, and passed a law banning the use of materials seen as promoting LBGT and gender education in schools.

Attempts to add and center the history of the oppressed in the mainstream have also been met by resistance. For instance, in 2020-21, in the U.S., politicians and opinion-makers at the state and federal levels have started to fight against education about what they called “divisive ideologies,” but essentially meant Black history in American schools. In 2022, an Indiana state senator said that teachers “need to be impartial” when teaching about Nazism and fascism. Hidden under the label of a reaction against critical race theory, the opposition to truth-telling about the history of genocide, enslavement, Jim/Jane/Jose Crow, the Holocaust, and so on has identified innovative tactics to oppose adding the historically oppressed to the center.

At the same time, the proponents of racist and homophobic rhetoric have successfully managed to co-opt an anti-elitist agenda as theirs, attracting, among others, poor whites who critique the social and economic privilege of liberals. The growth of populism and extremism, including via social media, continues to elevate risks at a global level. And the pandemic has posed additional challenges for marginalized people and historically oppressed groups, including Roma.

Roma Day in time of war: Solidarity event in support of Ukrainian Roma

On the occassion of Roma Day and to stand in solidarity with Ukraine and Ukrainian Roma, RGPP alumni organized a panel discussion and film screening.

The documentary film “My Childhood, or How I Fled Kosovo” is about two survivors of the Kosovo War, who fled their homes together with their families as the war broke out. The film characters share stories about their struggles, obstacles, and insecurities they had to go through and where they stand now.

How have been Romani people affected by wars, in particular in Kosovo and Ukraine? What are their own experiences? What forms of hostility and solidarity have they faced? What kind of special challenges do Romani women face? What kind of support can we provide?
Panelists:
Moderators:
Please consider donating for the Human Rights Fund for Ukrainian Roma : https://chuffed.org/project/human-rights-fund-for-roma
The recording of the event can be viewed here: