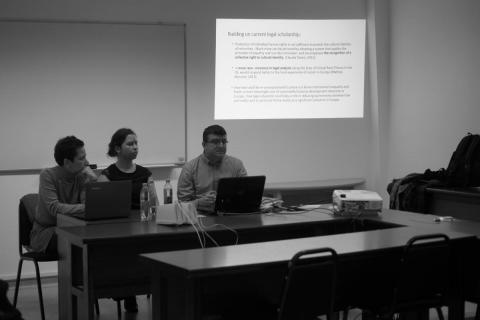 The presenters of the second seminar during this term will be three of the RAP graduates: Jelena Jovanovic, Junior Research Fellow, Center for Policy Studies at CEU, Simona Torotcoi, doctoral student of Political Science, Public Policy and International Relations at CEU and Bujar Taho, doctoral student in Comparative Constitutional law at CEU.

Jelena Jovanovic while continuing to be interested in the intersections of gender and ethnic based institutional discrimination, during her MA program at Central European University in Budapest and University of Hall in England (2012-2014), she got interested in the wider situation of Romani representations and self-representations, both at transnational, but also at national level. Specifically, she has conducted research on representation of Romani people in general and Romani women in particular in media and academic discourse.

Simona Torotcoi joined the Doctoral School of Political Science, Public Policy, and International Relations in September 2014 (Public Policy Track). Her main research interests include the study of higher education policies, especially access and participation policies. Currently she is conducting research on the implementation of the Bologna Process in Germany and Romania.

Bujar Taho is a law graduate from Albania and a 2005 RAP alumnus who has just commenced his doctoral studies in comparative constitutional law at the Central European University in Budapest, Hungary. Upon completion of Roma Access Program, Bujar got selected as a Fulbright scholar and obtained his Master of Laws degree in International and Cimparative Law at the University of Pittsburg in the United States. From late 2007, Bujar started to work as legal counselor and University lecturer and soon after gradually built a career as project manager of several UNDP interventions on social inclusion of Roma in his home country, Albania.