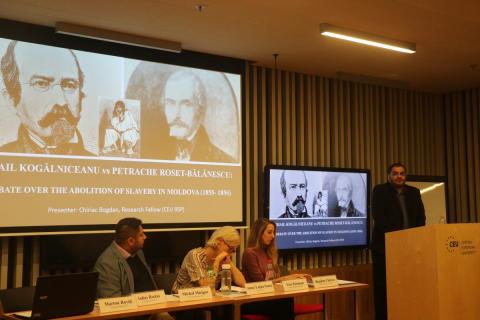 The second roundtable discussion of the Romani Studies Program (RSP) was held on the 9th January on slavery, genocide, and resistance which allowed scholars to critically reflect upon contemporary memory politics and the way Roma minority’s involvement in various historical events was misrepresented or rendered invisible.

At the discussion, two post-doctoral fellows of RSP presented their research. Through the text analysis of open letters of two noblemen, Bogdan Chiriac analyzed the abolitionist movement in Moldova during the first half of the 19th century. He presented the debate about different approaches to the abolition of slavery and touched upon the reasons behind choosing a top-down approach to abolishment.

Lise Foisneau talked about the resistance of French nomads during the Second World War. She provided a new interpretation of the persecution of the nomads by highlighting the life story of Paul Schaenotz who took part in the resistance against the anti-nomad legislation. Foisneau argued that despite the fact that the French authorities viewed Paul Schaenotz as a common law offender, he was a resistant fighter who should be reclassified as a political deportee of his time.

Anna Lujza Szasz, a sociologist working at the Hungarian Academy of Sciences commented on the presentations. She stressed the importance of paradigm shift from victimhood to resistance and the multiple ways agency can be understood.

Besides the roundtable discussion, the most recent issue of the Critical Romani Studies was launched. All articles are available at https://crs.ceu.edu. A new call for papers has been published as well.

We would like to thank everyone for participating in this event. The next discussion will be on identity politics, political mobilization, and emancipation and is taking place on 23rd January 16.30-18.00.