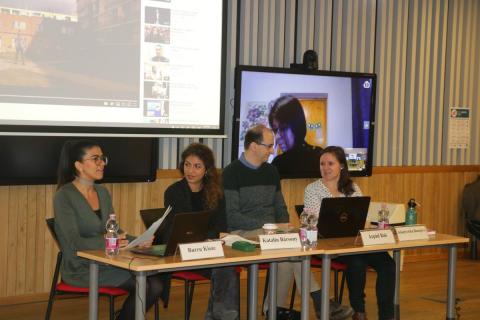 On the 27th February, a roundtable discussion was held on the representation of Romani people in various forms of art and media. The event was organized by the Romani Studies Program and the Department of Sociology and Social Anthropology at Central European University.

The first speaker of the event was Katalin Bársony who is a documentary filmmaker and executive director of the Budapest-based Roma media organization, Romedia Foundation. Bársony talked about the way motion pictures can be used as a tool to shape identity, create counter-narratives, establish one’s own position and voice. Bársony argued that the images of Roma in recent cinematography reflect the 19th-century literature and therefore, it is important for the new generation of Romani filmmakers to deconstruct the negative portrayal, develop their own narrative and create authentic representations of the Roma community. Leonor Teles, a Portuguese Roma filmmaker who created a short documentary called Batrachian's Ballad (Balada de um Batráquio), used film as a medium to call out discriminative practices. In this way, filmmaking became a form of activism through the screen.

Dr. Mária Bogdán, postdoctoral research fellow at Heidelberg University, and former fellow of the CEU Romani Studies Program, talked about the self-representation of Hungarian Roma in social media. Bogdán argued that social media is able to empower the Roma community by allowing them to define their own identity and deconstruct racialized images of the Roma. Social media can also be used as a vehicle for the Roma movements. An example of this was the campaign led on social media platforms at the time of the 2011 census that encouraged the Roma community to declare their ethnicity in the census.

The last speaker Árpád Bak was also a former recipient of the Romani Studies Program Fellowship. Bak’s presentation focused on the Romani movement in the interwar period. Bak illustrated the way the Roma community attempted to decolonize the image of Roma musicians and challenge the perception that Roma musicians are subservient. János Bihari was a famous Roma composer whose statue was placed on Margaret Island in the 1920s. However, in 1937 the statue was moved to remote, hardly visible and accessible place on the island. This was after the National Association of Hungarian Gypsy Musicians attempted to use Bihari’s statue as their own memorial place. The erasure of the statue did not only mean the disappearance of it from the park’s public image, but it was also accompanied by a discursive erasure as the books about the island did not mention the statue and its location.

Jekatyerina Dunajeva from Pázmány Péter Catholic University was invited as a discussant for the event. Dunajeva talked about the common points of the presentations, some that were identified are that identities are fluid and constructed, and that part of identity formation is achieved by claiming certain urban spaces or attributing meaning to certain items. She also posed questions about self-representation, whether it is a reaction to negative stereotypes or the creation of a completely new identity. The unedited video recording of the event is available here.