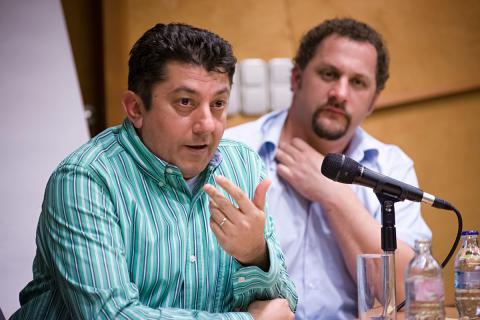 During this seminar, Dr. Rostas will define the concept of anti-Gypsyism, its intellectual roots and different forms of its expression. The seminar is centered around the paper History of Antigypsyism in Europe: The Social Causes, by Makrus End. The reading is part of the volume of papers from the International Seminar 'New Faces of Antigypsyism in Modern Europe'. This paper involves multiple levels of analysis, precisely because anti-Gypsyism is a central concept in the formation of Roma ethnic identity and the Romani movement. It will be discussed and analyzed the links between these concepts in order to develop a deep understanding of its impact on the everyday life of Romani subjects, as individuals and collectives. In the last part it will critically be discussed the proposal to establish a European Roma Institute for Arts and Culture as an institutional response to anti-Gypsyism.

Dr. Iulius Rostas is Visiting Lecturer at Corvinus University of Budapest and an Affiliated Fellow with the Institute for Advanced Studies at CEU. He has worked for the Open Society Foundations, the European Roma Rights Center and the Government of Romania. Dr. Rostas has conducted research on Roma during Holocaust with the Shoa Foundation, on HIV in the Republic of Moldova, on Roma school segregation in Central and Eastern Europe and on Roma political participation in CEE. He has published several articles and book chapters on Roma participation, Romani identity and movement and Roma school segregation. Dr Rostas is the editor of "Ten Years After: A History of Roma School Desegregation in Central and Eastern Europe" (CEU Press, 2012) and in 2011 he published "Social Inclusion or Exclusion: the Rights of Persons Living with HIV in Moldova" (Cartier Publishing, 20011).

Currently, Dr Rostas is working on a project comparing policies towards Roma in Czech Republic, Hungary and Romania and the way the policy-making process addresses identity issues.Using policy design theory as part of critical policy studies his research explores identity representation in policy-making along four dimensions: participation of the ethnic group, ethnic claims and grivances, representation of the ethnic group and the problems they are facing and causal relationships. This research is funded by the OSF Roma Initiative Office.